It Came From the Dollar Bin: Brute Force

I have finally returned from drafting a novel, working on an urban fantasy lesbian romance comic book script, self-pubbing some *cough* other short fiction, and playing far, far too much Dungeons & Dragons to give you more...

It Came From the Dollar Bin!

In honor of this week's eagerly anticipated Transformers Regeneration One #81, I present a comic published by Marvel with characters and concepts created by Bob Budiansky, a script by Simon Furman, and art by José Delbo. Transformers? Oh no. (You can tell because the colors aren't by Nel Yomtov.) I'm talking about a book that got a whopping four issues out of its initial 4-issue limited series, a toy comic with no actual toy to tie in to...Brute Force! Read on for a look at Marvel's short-lived foray into creating their own toyetic non-superhero IP, including an interview with series writer Simon Furman.

The most striking thing about Brute Force really is how much it looks and feels like a toy comic in the vein of Transformers and G.I. Joe. With no apparent ties to the mainstream Marvel universe, the story follows a team of five animals - Soar the eagle, Lionheart the lion, Wreckless the bear, Hip Hop the kangaroo, and Surfstream the dolphin - who have been given human-level intelligence and powered armor by environmentally-minded scientist Doctor Randall Pierce. They're initially put into action to try to rescue another modified animal, a gorilla who is destined to become a part of rival animals-in-suits team Heavy Metal, from the clowns who ape-napped him, but they soon find themselves fighting polluters, toxic waste monsters, militant terrorists, and a walking shark with sawblade wheels. 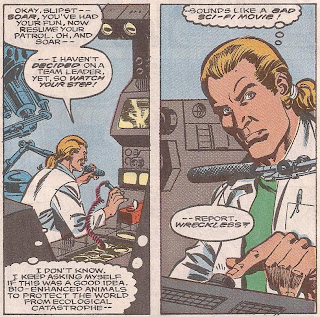 And yes, I literally mean clowns, and it's the comic's opening scenes of clown-costumed thugs with automatic weapons that sets the tone for the series as a whole. At a time when preteen-skewed toy comics like Transformers and G.I. Joe were being replaced by the slightly younger Archie Comics adventures of the Teenage Mutant Ninja Turtles, Brute Force overshot the mark a little with a complex story of corporate backstabbing, greed, and environmental responsibility. Had it come along five years earlier it might have caught on alongside the slew of other toy-based IPs, had it come along three years later when Marvel bought Toy Biz it might have actually gotten the plastic immortality to which it clearly aspired, and had it come along once environmental responsibility was properly on the pop culture radar it might have lasted more than four issues.

But let's turn things over to the series writer, Simon Furman, who was generous enough to dig up his old notes to answer some questions for me:

Jen: Two of the issues credit the characters to a Charles Viola. Who was Charles Viola? Was he someone at Marvel, an outside IP developer, a random schmuck who wandered in off the street...?

SF: Here’s how I remember the genesis of Brute Force. It was 1989/1990, and by this point I was writing Transformers for Marvel US. I had five or six issues under my belt, and maybe I’d impressed Bob Budiansky, the previous writer on Transformers, because he came to me and asked if I’d like to write this new brand-style comic they were developing in-house called Brute Force. It may even have happened while I was living & working in NYC, and hanging around the Marvel offices. It would fit the timeframe. Now Bob would know better than me, but my recollection is that Brute Force was kind of a reaction to all the hard work Marvel had put in to flesh out series like Transformers and GI Joe and probably a slew of other 80s toy lines. Rather than be handed a toy line and create the back story for it (and ultimately own nothing of it), Marvel (possibly spearheaded by Editor-in-Chief Tom DeFalco, but it could equally be that Bob took the idea to Tom) decided to create their own toy-friendly IP – Brute Force. The idea was, the comic would spin out into toys and an animated show that Marvel actually owned the rights to. I think Bob did all the hard work on developing the characters and underpinning story. I can’t remember offhand if Jose (Delbo) did the initial designs or Bob did (as he’s a very talented artist in his own right), or a combination of the two, but really Bob was the driving force behind the project. So Charles Viola? I have no idea. Some kind of pseudonym perhaps?

Jen: Brute Force seems like a blatant toy line/cartoon tie-in comic, except there never was a Brute Force toy line or cartoon. Was something like that planned? Was the comic created to tie into something that was canceled, or was it meant to be the first part of a new IP?

SF: So what happened to Brute Force? Well, the four-issue series ran its course, but the expected rash of toy/TV/game licensees for the IP/brand never materialized. Not sure why. Personally I thought it was a very solid, well-realized toy-friendly concept. But maybe it arrived at exactly the wrong time. The 80s toy/action figure/comic boom that ultimately spawned Brute Force was kind of over, and Teenage Mutant Ninja Turtles and Power Rangers were more the taste of the toy-buying pre-teen, with their more overt action/violence and manga-inspired martial arts feel. And early home computer consoles were also making an appearance. And if anything, Brute Force was a little ahead of its time in terms of its eco-friendly tone and stance. And eclipsed by the concurrent Captain Planet and the Planeteers. It just, to me, fell between two stools.

Jen: The ads for Marvel's other comics that ran in Brute Force suggest it was intended to be part of their stable of children's titles. You're known for writing Transformers, ostensibly a “kid's comic”, with no real regard for target age groups, and Brute Force shared that tendency toward complicated storylines of trust and betrayal. Were you given a target age group for Brute Force? If so, did you pay it much attention?

SF: Here’s the thing again of Brute Force possibly falling between two stools – this time ‘age-group’. It probably should have been pitched much younger. Aimed at 5-6 year-olds. Because yeah, the storylines and themes were quite sophisticated, but intelligent animals in suits would have maybe suited a younger demographic better. I can’t remember why Brute Force wasn’t put under Marvel’s Star Comics group (which catered for the younger comics reader), but I think all along Marvel wanted Brute Force to hit that Transformers/GI Joe demographic, but of course they’d moved and tastes had changed. Overall, I think Brute Force was a great idea that just missed its ideal window. 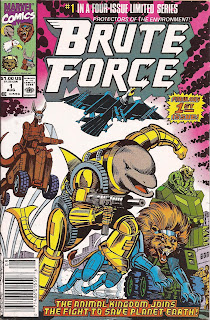 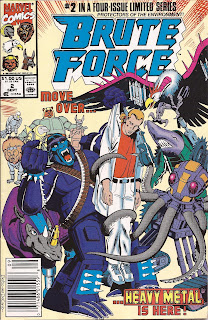 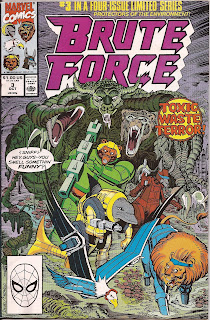 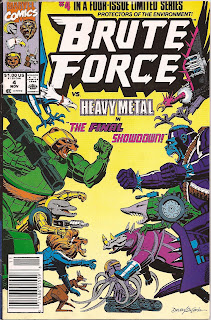