Okay, so it's about time I came back to this subject. You know how in Archie comics kissing basically means the same thing as sex? Of course you do. I already did an article about it! If you haven't read that article go there, then come on back.

So kissing = sex in the universe of Archie comics. But what does that mean for the work of Al Hartley? As we know, Hartley wrote a series of official comics about Archie for Christian publisher Spire Comics... wait, why do we know? Well because I already told you. That's right, here at 80 Page Giant we believe in having continuity between our articles! We are a comics blog, after all.

So you've got those two elements. Wholesome Christian comics and kisses that are basically a metaphor for sex. How do you reconcile the two? Did Al Hartley realise that kissing was the same thing as sex? Maybe, in his ignorance he didn't realise about the metaphor, and there was some hilarious results?

Okay I'm not fooling anyone pretending Al Hartley might not have known about the kissing metaphor. Hartley was a well-established Archie artist, and a very smart one at that. More importantly, these are Christian comics, they're already packed full of symbolism. Symbolism is their bread-and-butter. He knew about the metaphor my friends, and in fact he very, very, specifically used it. Let's look at a few examples, shall we?


Notice anything? That's right. In the Christian version their lips don't touch! That's pretty consistent, in fact. They just sort of hover by each other with their lips puckered, forever about to kiss, but never actually making contact. In fact the only time that the kisses are actually consummated on panel (at least in the Spire comics I have) are in the few scenes where Hartley's using the kiss scene to imply rape. By Reggie.

What's that? Date rape in a Christian comic? I'm totally serious, check this out:


Selfishness may be the mildest description I've ever seen for date rape.

Y'know what? Let's move on from that to something a little different. Maybe something a bit more light-hearted. For our last example, let's take a look at a case of hilarious metaphorical blue balls. 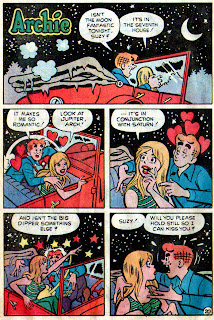 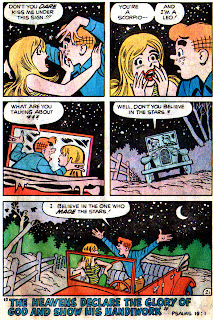 Okay so in this little story Archie is wantin' it. In the first page he's downright furious when this poor girl refuses to put out. But this girl, she doesn't believe in god, so she's totally gunna blueball the hell out of poor Archie.

The message here is so weird. So... if she was a good Christian girl, Archie would have scored? Is that really the message that Hartley was trying to convey here? Certainly at the very least he seems to be saying that pagan girls don't put out, because they're too wrapped up in other stuff to meet a man's needs.

Things can get really weird when you start to mix your metaphors with your parables.