The Queer Case of the Gay Joker First off, given the potentially volatile content related herein, I apologize in advance for the pun-title of my post. I don't mean any harm by it, but likewise could not resist referencing The Queer Case of the Murdering Butterfly.

I've had this nugget of information for a while, but only recently got the relevant scans done to illustrate that I didn't make it up, given the evidently obscure nature of the info. I don't want to misrepresent anything, so this post will take a little bit to get to the point. But, please, read on. 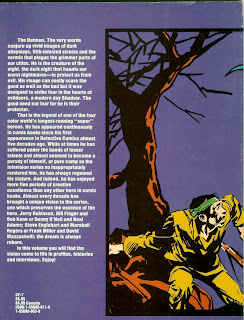 I've owned this one Batman book called the Comics Files Magazine Spotlight On Batman Files for a few years. It was published in 1986 by an independent group called Heroes Publishing Inc., who also put out guides to other comic properties along with sci-fi and horror TV shows. To the left and right are the front and back covers to their Batman book - click the thumbnails to enlarge.

The book describes Batman's history up to the time of publication, with chapters about the Golden Age, the New Look, the "Englehart/Rogers Age" and "the Miller Revolution". It covers creators who worked on the series, supporting cast members and villains, and includes interviews with Steve Englehart and Frank Miller (who gives insight into his "upcoming" Batman: Year One project).

But one factoid contained in the Batman Files book has always held my attention, and I've been curious about it ever since I first read it. It's buried in the introduction, which talks about what influenced Bob Kane, Jerry Robinson and Bill Finger. You can read it - highlighted - below. 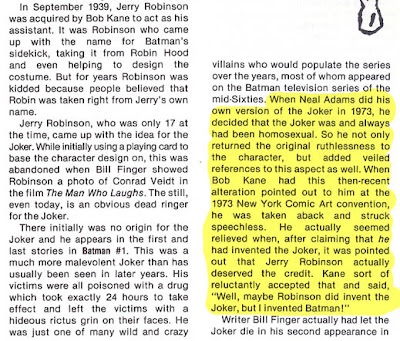 So... Neal Adams decided that the Joker had always been gay way back in 1973. Has anyone else ever heard of this? Did Denny O'Neil have a say in it? It certainly doesn't seem to have been a secret at the time, given the Bob Kane anecdote.

(For what it's worth, here's the rest of that page. Again, click to enlarge.) 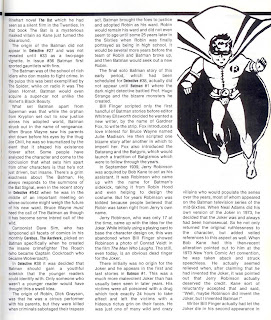 I'm not really sure what to think of it, myself, as I tend to regard the Joker as being more asexual than any particular orientation. I'm just mildly weirded that none of my comic-geek friends had ever heard of this before... and wondering how the semi-recent revelations that Neal Adams is a madman plays into this in retrospect, if at all.
Written by Monzo