Ant-Man is out in theaters. We saw Ant-man. So we're here to talk about Ant-Man.

We give you some news, reviews of Fantastic Four #644, various classic Daredevil trades, Baldur's Gate #5, another Inhumanoids mini-comic, Transformers: More Than Meets the Eye #39, Transformers #39, and Transformers Windblade #1. And tell you things you can use the 2003 movie Daredevil for as we watched the director's cut in preparation for the upcoming Netflix series.

The gangs all here even though half of us are feeling under the weather. This fortnight we talk about even more Secret Wars solicites, Howard the Duck #1, a Golden Superbook of the Inhumanoids, some old UK kids joke comics, and whatever else pops into our rambling minds.

After talking about catching up on watching Marvel's Agents of SHIELD, there is lots of talk about Transformers: More Than Meets the Eye #38. A little bit about Amazing Spider-Man #15. And just a smidge about Silk #1, Rocket Raccoon #8 and D4ve #1.

We're full of news this time - new books at DC, Secret Wars at Marvel, and some movie news about some kind of spider man. Also, we read some comics: Amazing Spider-Man #14, Transformers: Punishment, Hawkeye #19 and #21. Plus: yes, it's true, Zatanna spent several years wearing a lobster for a hat.

Another catch of of talking about everything and some comics: Spider-Man and the X-men #2, Fantastic Four #15, Guardians of the Galaxy #23, Transformers: More Than Meets The Eye #37, and more Dick Tracy.

It's a quick one this week, as we discuss Conan/Red Sonja #1, Ant-Man #1, Unbeatable Squirrel Girl #1, Ms. Marvel, and more Dick Tracy. Also: racism.

Things that cause mental conflict: The Wizard

The Wizard is not strictly a comic, and I only own one random issue of it. It's what's called a "Story paper", and is published by famous British comics publisher DC Thomson. I've never really paid attention to the book because I haven't read it... but today I gave it a decent look and was kinda left in a state of cognitive dissonance.

The only comic is the front page of the magazine -- and it's drawn wonderfully. It's so lively, so interesting. 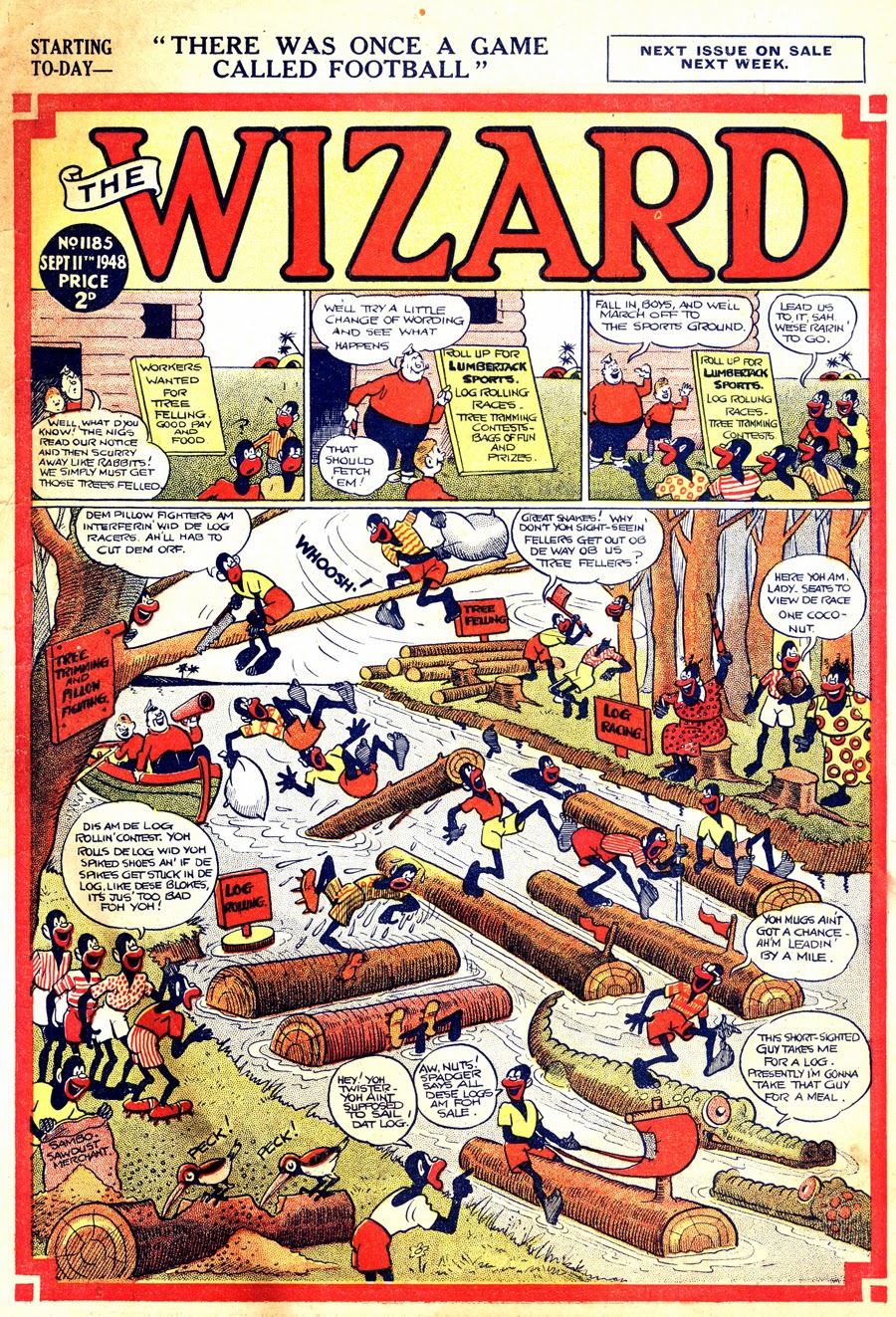 --Andrew S.
("There was once a game called Football" is a sci-fi text story, just for the record.)

Written by Andrew Sorohan No comments:

This set of panels is from Giant-Size Super-Stars #1. The basics of the plot are that the Thing and the Incredible Hulk have had their minds swapped. So Hulk-Thing is going around hitting people who normally would be on the Thing's side. 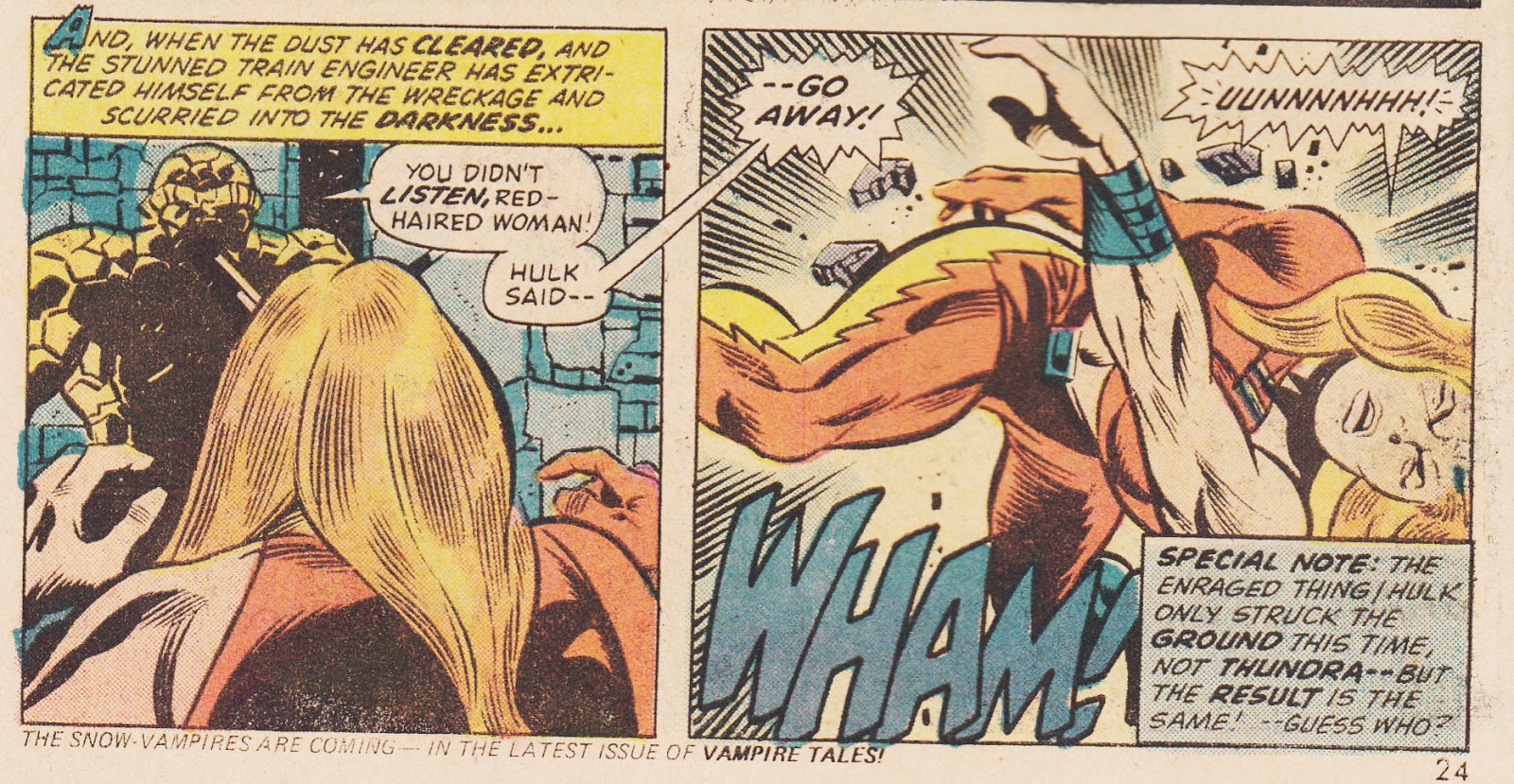 I'm not sure what the reasoning was behind the special note from Roy Thomas (Who was the editor on this book) was. Was it to make the violence against a female seem less drastic? Was it to explain what was happening because of the lacking art? I can't tell.

All I know is Thundra don't need a editor's note to stick up for her, guys.

80Pagecast 45: Looking Ahead As We Look Back

No real comicbook new this week because everyone was sipping the nog and making with the holly jolly. Some comics did come out so we talk about Axis #9, Fantastic Four #14, Transformers: More Than Meets The Eye #36, Dick Tracy fighting Flattop Jr and X-Factor #18. We manage to avoid doing a special year in review topic by talking about what we are excited to read in the new year. Well and some talk about stuff we liked last year.