So it's fair to say that I'm a fan of Jack Kirby. However, I don't think I've read as much of his material as I would like - in terms of collections, I believe I only have The Forever People of his Fourth World books, and a couple trade paperbacks of his '70s Captain America and the Falcon run. So when I saw a reprint of the Joe Simon/Jack Kirby run of The Fly for cheap at a local comic show, I made sure to snatch it up.

The Fly is one of the Archie Adventure Series heroes, published by, yes, Archie Comics. The company actually started out publishing superheroes (under the name MLJ Magazines), but America's Favorite Teenager soon eclipsed his super-brethren in popularity and became the publisher's flagship character.

Where does The Fly figure into this? He's not one of the "Golden Age" heroes of MLJ, for one, having been created by Simon and Kirby in the early 1950s. He became part of their core stable in years to come, though - whenever there was an Archie superhero revival, you'd be sure to see him alongside The Shield and the Black Hood (who did start out in the '40s), even if he was sometimes called Fly-Man. 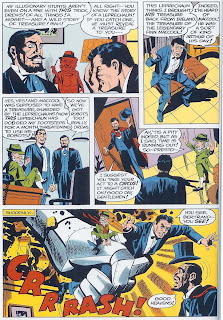 The Fly's original concept was very much in the vein of Fawcett's Captain Marvel, being a young orphan who transformed into an adult hero via, uh, a magic ring he got from a dimension of super-evolved fly people. The core transformation concept was changed after Simon and Kirby left the book (with the Fly's alter ego being aged into an adult district attorney), and its usage in later revivals has come and gone at the whims of those in charge. I first encountered the character when DC licensed the Archie heroes for its early '90s !mpact subline, though I confess to never having read that incarnation of the character.

I'm not sure what I expected out of this reprint book, really. It's interesting in that it contains work from Kirby that's post-Comics Code but pre-Fantastic Four #1, material that I don't know has been reprinted very often. That said, the entirety of it is not Kirby; the story that I am presenting for this post, for instance, I believe was credited to Dick Ayers.

Aside from some visual experimentation by Kirby - the "wide angle scream", as the book proclaimed it, wherein the drawings were done landscape instead of portrait - these early tales of the Fly came off as kind of mediocre to me, with the last chapter eliciting a response closer to "huh, I finished the book" than "aw, I finished the book and there are no more classic Fly adventures to read". I'm not sure I'd recommend The Fly to anyone who isn't a Kirby aficionado, or maybe one of the handful of people who have nostalgia for !mpact and are curious to see its roots.

Anyway, the main reason I am presenting this story is because it is about a leprechaun and his robot army. This was the highlight of the book for me, and as far as I'm aware neither Tim O'Casey or his wrecking crew have ever appeared again.